Made In America, Trouble the Dog Brings Comfort During Dark Times

The unprecedented pandemic crisis has brought trouble into the lives of so many. For children, bringing Trouble the Dog into the picture offers comfort and hope. A rare “breed” of toy, Trouble is 100% made in America — a quality that means those involved in manufacturing the toy are paid a fair wage. A story from the Alliance for American Manufacturing highlights Trouble the Dog’s journey as an all-American comfort toy. Read it here.

It almost feels like play is becoming a lost art. The colorful, flashing screens of the ubiquitous electronic devices that have made their way into children’s hands in recent years have a compelling allure. But in terms of impact on a child’s development, there is much to be said for “simple” toys that encourage old-fashioned play and human interaction. According to Dr. Aleeyaa Healey, “Research tells us that the best toys need not be flashy or expensive or come with an app. Simple, in this case, really is better.” Read more.

As it turns out, you may never grow too old to enjoy to comfort and security that stuffed animals like Trouble the Dog are known for offering children. A new study suggests that many millennials sleep with teddy bears and other plush toys from childhood. As clinical psychologist Dr. Shefali Tsabary observes, ““A teddy bear’s comfort may have helped us get through a difficult time, so it continues to represent an object that served an important role in our lives.” Read more.

For parents concerned about the pace of childhood, simplifying can pay rich dividends in terms of a child’s happiness and creativity. Read more.

What can stuffed animals teach children? More than we may think, according to one child psychologist. Read more here. 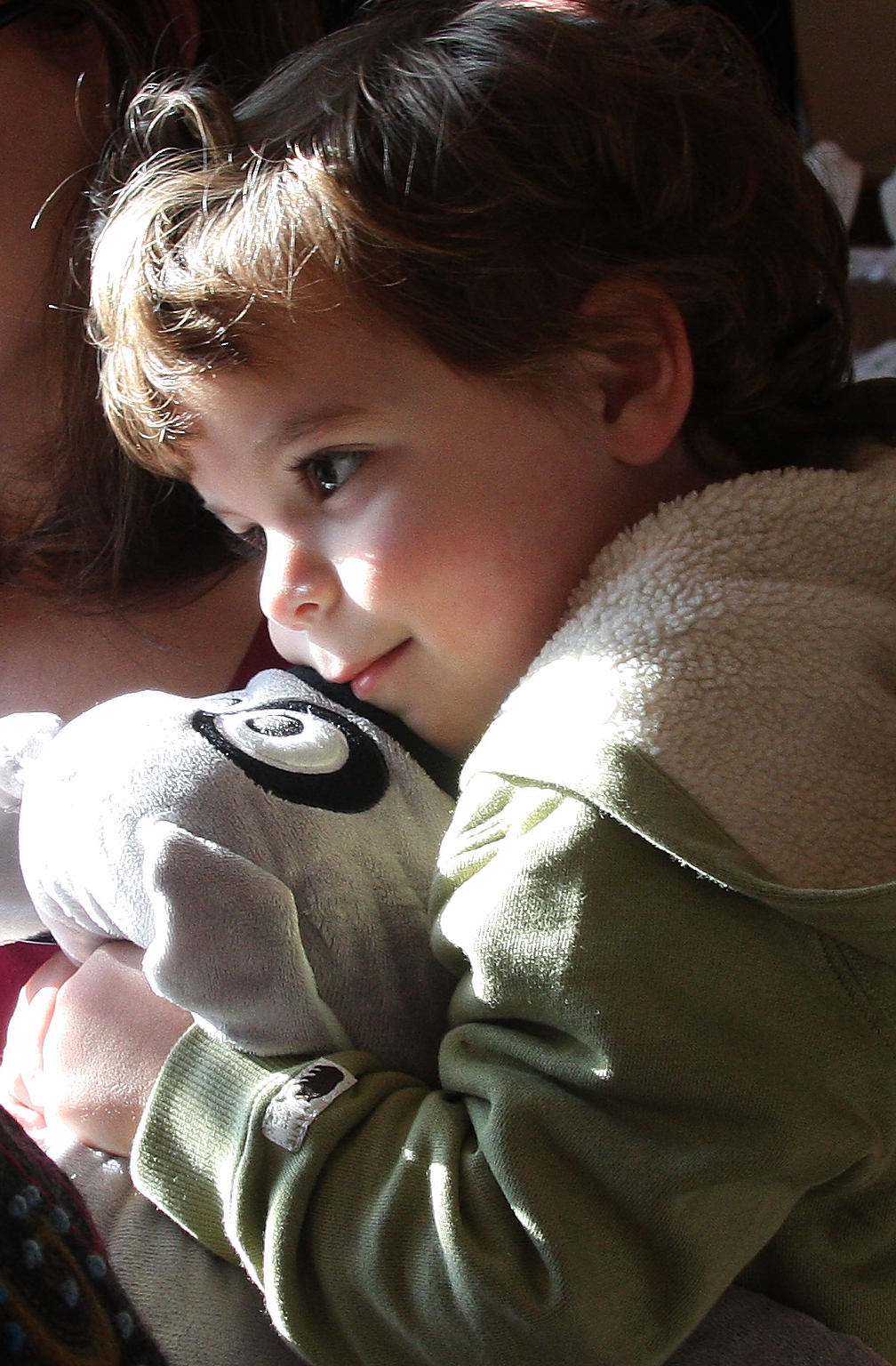 In case you haven’t yet encountered news of Zion Harvey, read his inspiring story on People online. This little boy’s message, “before you quit, try everything,” is an important reminder of the value of hope in troubled times. 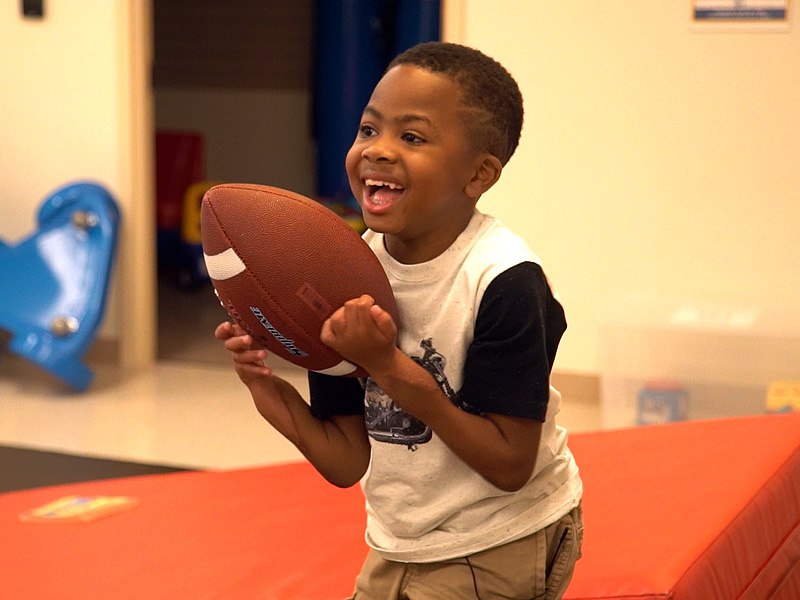 Zion Harvey. Photo by The Children’s Hospital of Philadelphia

The importance of talking about it In our work with Trouble the Dog, he is used as a coping mechanism — a best friend who is always there with a soft ear into which children can safely whisper their troubles and concerns.

In a recent Newsweek article, Britain’s Prince Harry speaks about the impact that the death of his mother, Diana, Princess of Wales, had on him.

Asked by ex-England footballer Rio Ferdinand about the possible impact of his own wife’s 2015 death on his children, the royal replied, “I really regret not ever talking about it [Diana’s death].”

Diana was killed in a car crash in 1997, when Harry was 12, but the prince said he was silent on the subject of losing his mother “for the first 28 years of [his] life.”

Hosting an event for mental health charity Heads Together, which he formed with the Duke and Duchess of Cambridge, the prince told BBC Breakfast, “It is OK to suffer, but as long as you talk about it. It is not a weakness. Weakness is having a problem and not recognizing it and not solving that problem.”

Prince Harry is hoping to open lines of communication… as we are with Trouble the Dog. It’s so very important.

The story that went viral this week about the three-year-old daughter of Michigan mom Stacy Feeley practicing a lockdown drill by standing on a toilet drives home just how stressed children are today. Burdened with fears that should never have to enter their minds, children need a coping mechanism like Trouble the Dog to help them work through their emotions.  Our classroom visits allow us to see that kids today have so much to say. Sometimes they simply need a non-judgmental confidante to “hear” them.

Carrie Schluter Made in America 0 Comments

An insightful post by Elizabeth Brotherton-Bunch of the Alliance for American Manufacturing tells the Trouble story, emphasizing our commitment to having the Trouble plush made right here in the USA!

The crying need for Trouble 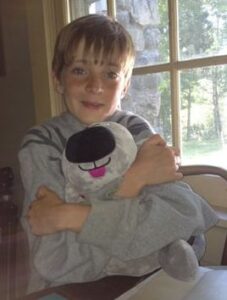 May is National Foster Care Month and the statistics are staggering. According to the Department of Health & Human Services, on September 30, 2014, there were an estimated 415,129 children in foster care. It’s probably safe to assume these numbers have continued to grow over the past two years.

We can all do our part to help vulnerable children going through such difficult times. For our part, we have launched an initiative that will allow us, with corporate and community assistance, to put Trouble the Dog into the arms of as many of foster children as we possibly can. Trouble is a proven coping mechanism who is “on call” 24/7 whenever a child needs the reassurance that a huggable friend can offer.

We recently had the opportunity to speak with a foster mother who says that she can still hear the sobs of a very young child she was fostering. She is enthusiastic about our initiative and said she would have given anything to have been able to put Trouble into the arms of the heartbroken child and let him know that Trouble was his to confide in and keep for his very own.

Times are tough. Trouble can help.

Once upon a time childhood was simple. Children just played. Not anymore.

Kids are pressured at school and over-exposed to technology at home. So many are dealing with poverty, bullying... and these days, more than ever, fear. So we created Trouble, a plush "therapy dog" who is a member of a rare breed -- a 100% made-in-America toy.

The Magic of Trouble the Dog®

Trouble is a global children’s character. His iconic, expressive face attracts kids like a magnet. Children seem to be able to feel his "energy." Inexplicably, Trouble helps kids hope, believe, and dream.

A large percentage of plush Trouble the Dog purchases are made by families of kids who want to give something special to a friend going through a hard time. Trouble is “on call” 24/7.

Won't you buy a Trouble for a special child in your life?